There are literally hundreds of thousands of people making Florida their new home every year as Florida officials estimate there are 900 people per day moving here!

There are plenty of reasons to love calling Florida home and here is our top 10 reasons you should consider moving to FL. 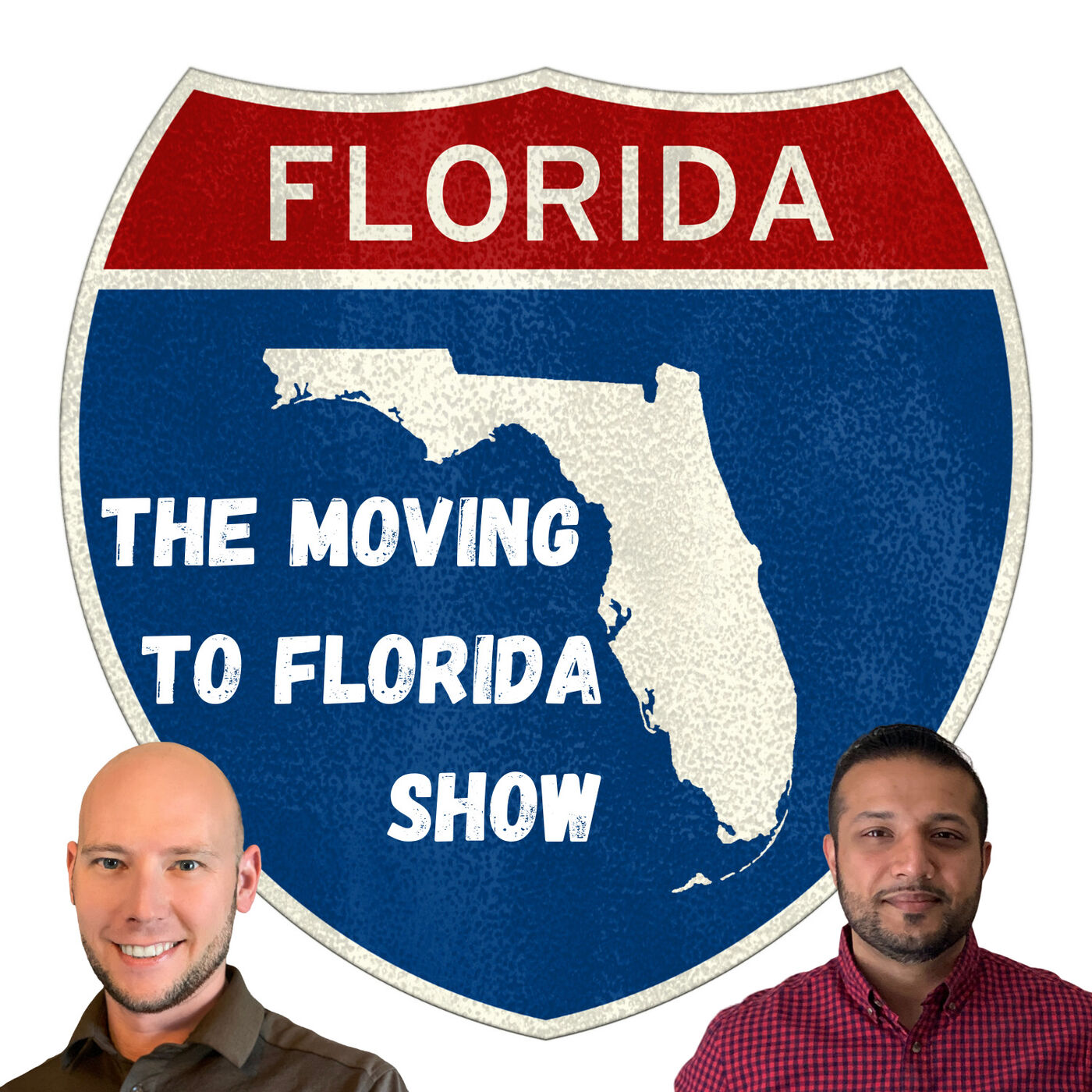 In this weeks episode we cover a wide range of topics.  We want to hear from you! You can reach us on our Moving to Florida Show Hotline by dropping a voicemail or text to 407-900-5859 Or drop us a DM on Facebook or Instagram: @movingtofloridashow and for Twitter our handle is @movingtoflshow. . If you would like to connect with us, if you have any questions, or if you need a realtor in Florida you can reach us at movingtofloridashow@gmail.com. Be sure to subscribe to the show if you like our content so that it will automatically download to your device and get you one step closer to moving to Florida!

10.) The cost of living isn’t as expensive as you think.

Cities like Miami and some of the prestigious beach town can be on par with some of our nations more expensive areas, and a home with ocean views will always be more expensive, but there are plenty of great areas to live throughout Florida that can be relatively affordable.

9.) You can live in a perpetual state of vacation or is it  “stay-cation”

Seriously, you will be living where everyone else vacations. Florida gets millions of visitors annually, most of them visiting the parks and beaches. If you’re in Central Florida, you’re near the theme park capital of the world, and pretty much anywhere you live in Florida you’re only and hour to an hour and a half from a beach. Most places, you’re even closer than that. As far as theme parks go, Central Florida is loaded with the: Disney Worlds 4 theme parks, 2 water parks and plethora of resorts, Universal Studios 2 parks, and brand new Volcano Bay water park, Seaworld, Fun Spot America, Busch Gardens, etc, etc. All of these offer special Florida Resident only deals on annual passes. We will discuss these in a future episode but it’s safe to say that many residents of Central Florida visit the parks regularly.

8.) There are plenty of sports teams to cheer for

From professional sports to college sports, Florida offers some of the best sports teams in the country to cheer on. While most states have one or two professional football teams (or none!), Florida has three: the Miami Dolphins, the Jacksonville Jaguars, and the Tampa Bay Buccanneers.

We also have great college’s such as the University of Florida Gators, Florida State, Miami Heat, and the UCF Knights.

Florida is the traditional home for Major League Baseball spring training, with teams informally organized into the “Grapefruit League.”

NASCAR (headquartered in Daytona Beach) begins all three of its major auto racing series in Florida at Daytona International Speedway.

7.) The majority of the year is sunny and warm

So we talked about this in our first episode, Florida is definitely known as a sunny and warm state.  While it’s true that it gets quite hot in the summer, there’s a large part of the year where temperatures are comfortably mild.  I love the spring and fall when normal temperatures ranges from the 60s into the 80s.  Our winters are also very mild, with temps rarely reaching below freezing.  The average high temperature year round is 83 °F and the average low is 64.8 °F according to worldclimate.com.

This is also pretty dependent on what part of the state you’re looking at, for instance in the pan handle it gets a little colder in the winters while if you live in south Florida you’ll likely never have a reason to even own a sweater.  With such beautiful sunny weather, Florida gives you more opportunities to get outside and explore the great outdoors.

6.) Florida is one of the least taxed states

Because Florida produces a tremendous amount of revenue from the tourism industry, Florida is indeed one of the least taxed states. Florida is listed as the number 8 most tax-friendly state according to Business Insider.

As we mentioned before, Florida has no state income tax. Of course, the IRS is still going to make sure they get their cut but the state of Florida isn’t going to charge you for producing an income for your family. For some of you moving from high tax states like New Jersey and California this could mean a savings of as much as 10% or more of your income. Of course, if you’re still employed in those states and working remotely from your new home in Florida, the state where your employer is located may still try to tax you. It’s best to talk to a CPA about this if you’re concerned.

Floridas sales taxes are relatively reasonable as well. Sales taxes will vary from location to location but here in Winter Garden in Orange County our sales tax is about 6.5% and we don’t pay taxes on grocery items. I frequently see Florida listed as one of the most tax friendly states, and we will definitely be doing an episode on this topic in the future.

5.) You’re never far from the beach, no matter where you settle in Florida

There aren’t many places in Florida where you can live that are more than an hour and a half to the beach. Here in Central Florida I can get to Cocoa Beach in an hour flat, while the gulf coast takes around an hour and a half to the gulf coast. Of course, there are plenty of beautiful lakes much closer to home. With major metros like Miami, Jacksonville, Tampa, Pensacola, etc the majority of Floridians live even closer to the beach. And Florida has some beautiful beaches as well. Some of Floridas beaches are frequently named in the top beaches in the world like Sarasota’s Siesta Beach, Clearwater Beach, Pensacola Beach with its sugar sand, Miami’s South Beach, and the list goes on. There are also many, many beautiful beaches that aren’t quite so well known. You’ll have to keep listening to the show for our beach episode when we discuss these.

The Florida economy and job market has been very strong due to its top industries of tourism, international trade, agriculture, aerospace and life sciences. In 2017, Florida had a record 116 million visitors (112 million in 2016). At year-end 2015, Florida’s economy was recorded as the 4th largest in the US behind California, Texas, and New York with a Gross Domestic Product (GDP) of $840 billion and a $77 billion-dollar state budget.

This is getting to be a recurring theme here but this is another topic we will do a full episode on. Central Florida is known as the Theme Park Capital of the World and it get’s that title for a serious reason. From the world renowned Disney World, Universal Studios, SeaWorld, and more. Nearly every one of these theme parks offers a specially priced annual pass for Florida residents.

The reason we feel this topic deserves it’s own episode is twofold:

First, being less than 30 minutes from Disney World we talk to people frequently who are moving to Central FL specifically to be near Disney.

Second, there’s not just one annual pass per park. There are a plethora of options at different prices with different perks and access.  This is definitely a complicated topic that will require some research to put everything together.

2.) Florida has an amazing variety of food and drink

With 825 miles of sandy shoreline, Florida is no stranger to good seafood.  According to the Florida Department of Agriculture, Florida produces “more than 84 percent of the nation’s supply of grouper, pompano, mullet, stone crab, pink shrimp, spiny lobsters and Spanish mackerel.”

Stone Crab season runs October through April and is sustainable because only the delicious claws of the stone crab are harvested, which regrow.  If you like to get outdoors there are plenty of opportunities to get out and catch some fish of your own, be it freshwater or saltwater.  Florida also has a scalloping season where you can go out and catch you own scallops!  Have you ever been scalloping? …

Florida also has many delicious craft brewers – one of our favorites is our local Crooked Can, their Axum Stout is a fan favorite!

We also have an awesome distillery up in St Augustine, which is known as the countries oldest city. At the distillery they make Small Batch Whiskey, Rum, Gin & Vodka.

Of course Florida is also known for it’s Oranges.  Florida is second only to Brazil in global orange juice production and the state is the world’s leading producer of grapefruit. Florida produces more than 70 percent of the United States’ supply of citrus.

In most seasons, more than 90 percent of America’s orange juice is made from Florida-grown oranges.

Florida is also known for strawberry and blueberry production, shoutout to Plant City and their annual Strawberry Festival.  I haven’t been to the festival before but driving through Plant City I can tell you there are miles and miles of strawberry fields!

The state also has a heavy Cuban influence, our neighbors to the south, so Florida is also known for amazing empanadas, Cuban coffee, plantains, and other Cuban dishes.

There’s definitely no shortage of things to do in Florida. Thanks to the 200-plus days of sunshine a year, Floridians are able to spend much of their time outdoors partaking in everything from watersports, athletics, exercise, theme parks, and local attractions.

As we mentioned Floridians also have discounted access to theme parks such as Disney World and Universal Studios.

There are also six cruise ports in Florida so if you need to get away for a weekend or even a long cruise, there’s a port nearby.

These are just 10 of the many reasons you should consider moving to Florida.  We want to hear from you, what have you considering a move to Florida?

You can listen to the companion podcast to this blog here or find it wherever you listen to podcasts. If you would like to connect with us about your move you can reach us at movingtofloridashow@gmail.com. You can also connect with us on social media on Facebook and Instagram: @movingtofloridashow and for Twitter we had to shorten it a little, our handle is @movingtoflshow.If you would like for us to reach out to you in regards to your move to Florida you can also leave your information in the form below.